NOTE: Spoilers ahead, so read no further if you haven’t seen the episode or read the book.

NOTES on the Episode:

Written by Toni Graphia, this episode finally has the 20th Century parts caught up to where the show left off at the end of last season.  I’m glad of it because as much as I loved Tobias Menzies, Claire’s (Caitriona Balfe) time with Frank (Tobias Menzies) was time that was not spent on Jamie (Sam Heughan).

The strength of Jamie’s story in the beginning of “Voyager” is the primary reason why it’s my favorite of the Outlander novels. What Jamie had gone through in the time after Culloden, leading up to his reunion with Claire, is compelling.

What Claire had gone through in that same time, not so much.

That is likely the reason Diana Gabaldon had structured Voyager the way she did.  In the book, we only got glimpses of Claire, Brianna (Sophie Skelton), and Roger (Richard Rankin) while they searched for Jamie. In fact, some chapters in the 20th Century were so short they were barely more than a page or two.  As a result, the book had a far larger portion of the early part before Claire’s reunion with Jamie emphasizing his story over hers.

But the show isn’t the book, and the show’s producers felt Claire’s story apart from Jamie needed to be given equal weight to his time away from Claire.  For the show, they’re probably right.

While Jamie’s time at Helwater did take up a majority of the screen time in the episode, the weakness of the 20th Century storyline made it really seem like it wasn’t enough.  And I get why they spent so much time on Claire’s story, I do.  She is the lead of the show, and it allowed them to insert some drama, increase the stakes for everyone, and up the suspense… That sort of thing is normally a winning strategy but in this case, it didn’t work as well as it has in other episodes this season.

In a big change from the book, they had Claire go back to Boston after actually giving up looking for Jamie.  It might have seemed like a positive change because it creates a reasonable rationale for Claire to leave Scotland and then ties that moment to Jamie leaving England.   Claire says ‘We have to go home’ to her child Brianna in 1968 and Jamie says ‘I have to go home’ to his child Willie in 1764…

They likely thought the undeniable narrative connections between the two stories will be so touching, and most people probably agree.

It’s a bit of an understatement that the mileage on that point will vary.

It didn’t help the episode, like at all, that I didn’t buy any of the drama in the 20th Century.  It felt forced and Claire’s decision to leave seemed out of character.

After it turns out they can’t find the ship’s manifest with Jamie’s name on it, Claire is understandably frustrated at the apparent fruitlessness of the task. Leaving might seem like a reasonable decision, but Claire isn’t a quitter, not by any stretch of the imagination.  Perhaps her decision to leave might have seemed less contrived if the scene with Joe Abernathy making the second call about her being fired if she didn’t return to Boson hadn’t been cut.

The pressure of patients that need her, and the obligation she has to the hospital, added to the seeming impossibility of finding Jamie, would have helped Claire’s decision to leave make more sense.

As far as it goes, the events on the 18th Century side of the episode made more sense to me, even with the changes they had to make for the adaptation.

The one thing I was most worried about not making sense, Jamie being blackmailed by Geneva to have sex (which results in the birth of William), actually worked, so hats off to Toni Graphia for how well she handled this scene.  In the book, when Jamie first had sex with Geneva, she asked him to stop mid-way through, but he didn’t. It was ‘okay’ in the end because it was her idea to have sex a second time.  It wasn’t rape, I suppose because she enjoyed it enough do it again?

The book was published in 1992, which might explain the somewhat flawed reasoning for that plot point. (Things have definitely changed in the last couple of decades in that regard.)

In today’s ‘no means no’ world, her asking him to stop, and he didn’t turned Jamie into a rapist, which he is not.  Added to Jamie’s strong moral compass, him doing that also seemed out of character.

In the show, while Jamie had been coerced to be in Geneva’s room, once he got there he had become an active participant.  He saw that she was in a difficult spot and had some empathy for her position, so he essentially moved into a sort of a mentor role for her first time.  It made sense.

And part of why it worked was because Sam Heughan and Hannah James sold it. The writing, acting, and directing worked together to make this scene into a more positive one.

William isn’t in this part of Jamie’s life for long, only the six years from 1758 to 1764, but he has a significant impact on Jamie’s life in later books. So, it was key for them to firmly establish Jamie’s bond and they succeeded in that.  While the requirements of the adaptation meant they couldn’t give William more time in this episode, they had given enough to have the boy believably bond with Jamie.

As for Jamie, he had a fantastic arc in this episode.  He started the episode on parole on a rich English estate. Geneva’s threat to have his parole revoked was real, since if anything happened that Lord or Lady Dunsany don’t like, he would be sent back to prison.

He was trapped there, and added to that (as he told Lord Dunsany), he still mourned his two lost children, Faith and Claire’s unborn child.  By the final frames of this episode, he had then lost a third, in an episode about loss it was a fittingly heartbreaking ending.

While the 20th Century part of the episode left a bit to be desired, the further development of Jamie’s friendship with John Grey, and his bonding and subsequent loss of William, in the 18th Century parts made this a key episode of the series and one of my favorites.

The weakest point of the episode was the acting of the episode in the 20th Century scenes.  It seemed the only person holding their end up, acting-wise, was Richard Rankin.

Sophie Skelton played her part too broadly.  As a result, the sorta-hyped first kiss between Brianna and Roger, as cute as they wanted it to be, wasn’t really cute at all. Richard Rankin seemed a bit flustered, which was adorable, but Sophie Skelton didn’t make Brianna’s impulsive kiss at all believable. It made the moment uncomfortable and seemed forced.  Then her abruptly leaving wasn’t well-motivated, so that left the scene feeling a bit flat.

While at times a capable performer, Caitriona Balfe really didn’t do her job here.  Claire came off as cold and stiff.  This when her frustration at not finding definitive proof of Jamie’s whereabouts post-Ardsmuir should have had a much more noticeable emotional impact on her.

Richard Rankin was more successful, even though he couldn’t really salvage the uncomfortable moment in the immediate aftermath of Brianna’s unexpected kiss.  When they had the final montage, however, it was particularly moving when tears welled up as Roger sat holding his old toy airplane.

Back in the 18th Century, Sam Heughan did a remarkable job as Jamie.  As I said, Jamie had a terrific character arc in this episode, and Sam Heughan was compelling in his performance.  In an episode filled with so many strong acting moments for him, the ending was probably the best.  Without saying a word, Sam conveyed Jamie’s devastation at losing yet another child.  It was heartbreaking

David Berry was terrific as John.  His depth of feeling for Jamie was clear throughout, I am looking forward to seeing him again later in the season.

And Hannah James gave Geneva some humanity, saving her from what might have been a bitchier portrayal. She was bossy and bitchy when she needed to be, but then in the sex scene she showed a real vulnerability that was touching.  I am sorry that she will only grace the show for this one episode.  She was terrific.

The ending montage was fantastic.  The song, a duet cover of Bob Dylan’s ‘A Hard Rain’s A-Gonna Fall’ by the Canadian band Walk off the Earth, was perfect. It was emotional and stirring.

This episode was so good in so many ways, but someone really missed the mark on Sam’s wig. It was a complete mess most of the episode and was distracting.

Overall, this is one of my favorite episodes of the series, but that assessment is based almost entirely on the events in the 18th Century and the power of the acting by all of the actors in that part of the episode.

– Jamie’s back scar latex ‘appliance’ looked a little worse for wear a time or two in the love scene with Geneva.

– Isobel Dunsany I guess doesn’t get as many dresses as her sister gets riding habits, she wore the same one over and over again… 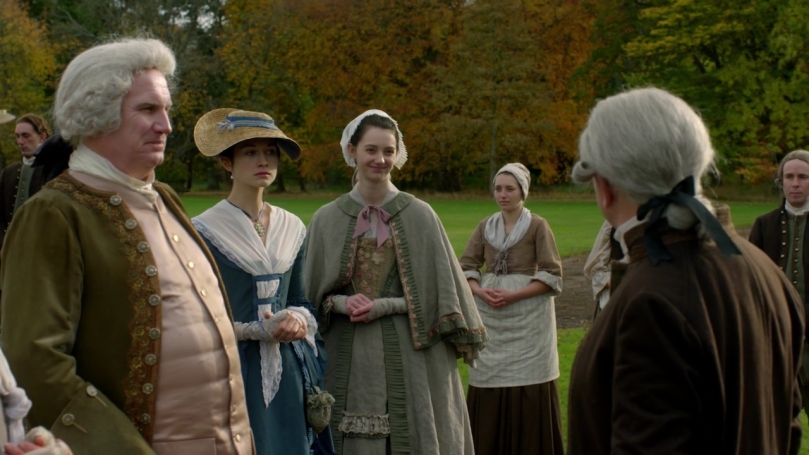 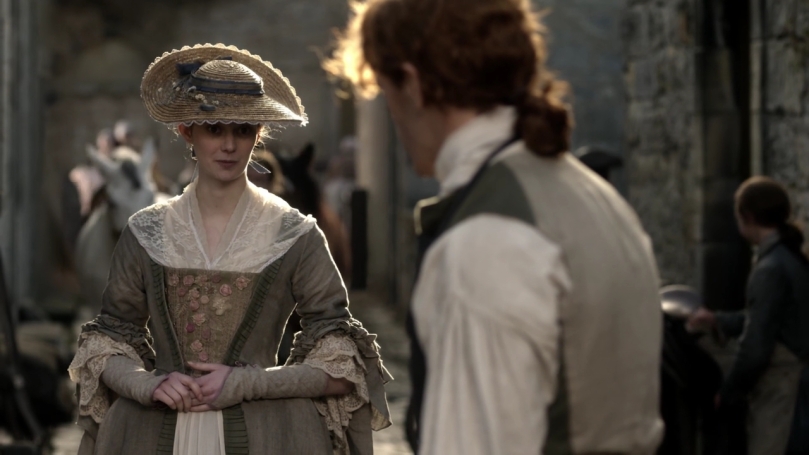 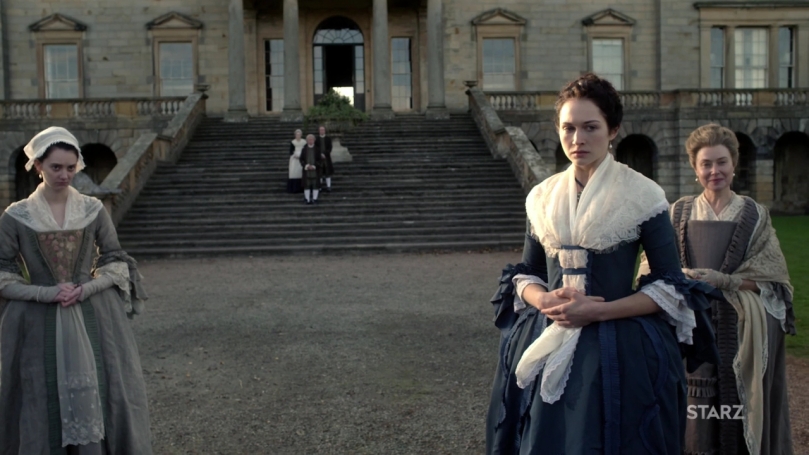 Video of A Hard Rain’s A-Gonna Fall (Bob Dylan cover) by Walk off The Earth: