NOTE: Spoilers ahead, so read no further if you haven’t seen the episode or read any of the books, especially “Drums of Autumn.”

Set in 1767 and 1970, this is a slight time shift in time frames since the two timelines are not 202 years apart.  This is something that happens in the books sometimes, the two timelines do not unfold completely in concert as time elapses, spending more time in one timeline, and moving things along faster in the other.  This episode was based on parts of a dozen chapters of “Drums of Autumn:” 3, 4, 5, 10, 11, 12, 13, 14, 16, 17, 18, and 23.  Though, there were so many little things taken from so many parts of the book in this episode I might have missed a few…

Written by Jennifer Yale, a new writer to the series (who had previously had written for “Dexter,” “Davinci’s Demons,” and “Legion,” among others), this episode was a marked improvement from last week.

And that is putting it mildly, and it might be surprising the episode’s as good as it is since they had a TON of heavy lifting to do to fit as much of the book into this episode as they did.  Yet, it didn’t feel rushed or that anything major was shortchanged.  This episode handled the adaptation of such a huge chunk of the book adeptly, making some very smart changes and additions to the book.

It was smart Jennifer gave Jocasta (Maria Doyle-Kennedy) lines that were crafted from Claire’s inner monologue in the book about Jamie’s objections to being her heir.  There was a lot more going back and forth in the book about whether Jamie would or wouldn’t become her heir, and Claire did a lot of thinking about it.  Long bits of expository voice-overs from Claire (Caitriona Balfe) about that would have slowed things down, so turning her inner dialogue from the book into Jocasta’s voiced skepticism and annoyance with Claire’s influence on Jamie was a beautiful choice.

I also liked that Jocasta, in separate conversations with Jamie and Claire, had what amounts to a post-mortem of what happened in the previous episode. That was a very dark episode so the characters needed, as well as the audience, needed to come to grips with what happened.  Conversations like there weren’t in the book, but it was a needed addition to the series’ version of events. I also really liked how Jocasta’s discussion with Jamie had a far different tone with Claire, she was disappointed but didn’t seem to blame him.  Of course, she would blame Claire since she’s the Outlander… It was perfect.

Another thing I adored about this episode was that they made Ian staying in America a conscious choice of his, which it hadn’t been in the novel.  In the book, Jamie was going to use his connections with his cousin Jared Fraser to get Ian a berth as a cabin boy on one of Jared’s ships.  It didn’t work out because Jared’s ship had left before they could get Ian on board and he never went back almost incidentally.

With Ian more fleshed out in the show and with everyone culturally being more cognizant of personal boundaries in the era of the #MeToo movement, Ian takes a firm stance with his uncle about going back to Scotland.  It’s a wonderful change.  I also liked that he took on facing the consequences of his decision himself and wrote the letter to his mother.

I really liked the smart way that Jennifer used side characters, like Fiona (Iona Claire) and John Quincy Myers (Kyle Rees), to slip in expository information that might have otherwise been tedious.  It felt natural as Fiona explained to her new husband, Ernie (Ciaron Kelly), about Brianna (Sophie Skelton), and the way John Quincy Myers talked about the Cherokee’s ways, helped keep the added information from seeming like an info dump.

And I loved the visual bridge in the script between Roger (Richard Rankin) and Bree (Sophie Skelton) driving down the same road in 1970 that Jamie, Claire, Ian, and Myers were traveling down in 1767.  It was very nicely done.

One thing I did not like was her cutting out the quote Claire uses from the Bible to explain why she will go wherever he goes.  To explain her views on where they will Claire recites a bit of Ruth 1:16 –

“‘Whither thou goest,’” I said, “‘I will go; and where thou lodgest, I will lodge: thy people shall be my people, and thy God my God: Where thou diest, will I die, and there will I be buried.’” Be it Scottish hill or southern forest. “You do what you have to; I’ll be there.”

It might seem like a small thing, perhaps, but it’s a tonal change in their relationship.  I don’t know if this is a good thing or bad thing, yet, in terms of the bigger picture, but I worry it’s indicative of the show trying to make Claire more of a feminist, and less of a partner to Jamie, than she is in the books. In the era of #MeToo I can’t say that’s a bad choice, but it is different.  I suppose only time will tell if there are any long-lasting negative consequences for that change.

Probably the best part of the episode for me, by far, were the scenes between Bree and Roger (Richard Rankin).  The episode served as an excellent re-introduction of Brianna and Roger as characters, and of Sophie Skelton and Richard Rankin as the actors playing them.

While Bree and Roger had been originally introduced at the end of season two in the finale, “Dragonfly in Amber” episode 2.13, they had only appeared in a handful of episodes since then.  In addition, the emphasis had been more on Claire in those episodes.

In this episode, their characters are fleshed out, really for the first time in the series.  Brianna proves herself as bold and strongminded as her mother and Roger is clearly totally in love with her.  In addition, Richard showed what a fantastic singer he is.

Their relationship goes through a massive series of changes as the episode progressed, and it was well thought out, even as compact as it was. Bits of several scenes were combined from different chapters; 4 (the Scottish Festival), 17 (Bree and Roger kissing and falling over), and 18 (the proposal), but it seemed to all fit anyway.

I especially loved how real their love scene turning into an argument seemed.  Folks get into arguments over misunderstandings all the time, it is probably built into human nature, so (again) it felt natural, even though it hadn’t been entirely in keeping to how things went in the book.  It was a beautifully written and acted scene.

While in general I liked how Jennifer adjusted the Otter Tooth/Indian Ghost (Trevor Carroll) scene for the show, it seemed like a bit of contrivance on how she got Claire there.  For Claire to go after Clarence the way she did so abruptly after Jamie’s horse threw a shoe, it just didn’t seem in character for Claire to be so eager to chase after Clarence.  I am not sure if that was because the way it was written, or the way it played out in the show, but it just seemed off.

I loved the way the show staged Otter Tooth’s appearance, with him flickering in and out with the lightning flashes. It was not only creepy, it also showed clearly (without Claire saying a word) that he was a ghost.  Claire seeing the axe wound on the back of Otter Tooth’s head made that connection.

And why do they always have Claire pause just after seeing Jamie after an ordeal like this?  I didn’t like the choice of her waiting for him to turn around before she moved toward him.  It’s like the pregnant pauses they put into HGTV’s “Love It or List” before the much put-upon homeowners announce whether they will ‘love it’ or ‘list it’ after the renovations on their home had been completed.  It doesn’t seem natural at all.  Maybe with another location it might have worked better, but it looked odd.

I wasn’t so happy with Claire’s explanation of how she got to Jamie either.  I’m not sure what it is, I know that the Outlander version of Star Trek’s ‘technobabble’ doesn’t always come trippingly off the tongue, I feel for the actors trying to make it sound natural, but Caitriona didn’t sell it.

At the end of episode I hated that she didn’t get in the explanation of exactly why strawberries are the emblem of the Fraser clan.  Jamie explains it to Claire in chapter 16:

“It’s a rare plant,” he said, touching the sprig in my open hand. “Flowers, fruit and leaves all together at the one time. The white flowers are for honor, and red fruit for courage— and the green leaves are for constancy.”

My throat felt tight as I looked at him. “They got that one right,” I said.

He caught my hand in his own, squeezing my fingers around the tiny stem. “And the fruit is the shape of a heart,” he said softly, and bent to kiss me.

I am not a stickler for the show sticking to the books, or at least not usually, but why cut that out?  The strawberries are the clan symbol of the Frasers, strawberry flowers are even on Fraser of Lovat’s clan shield:

But most importantly, they are symbolic of Jamie’s love for Claire, also being in the shape of a heart. It’s a completely mystifying omission.

The acting in the episode was fantastic overall, with a few slight missteps, but the standout performances were Richard Rankin’s and Sophie Skelton’s.

Richard Rankin brings a beautiful voice, along with earnestness, intelligence, a fierce temper, and a surprising vulnerability to Roger which is an almost perfect portrayal of Diana Gabaldon’s Roger MacKenzie.  His rendition of the titular ancient Scottish ballad was beautiful. It is easy to believe that Brianna fell in love with him while he sang.  His emotional moment at the Calling of the Clans ceremony at the end of the episode was especially moving. 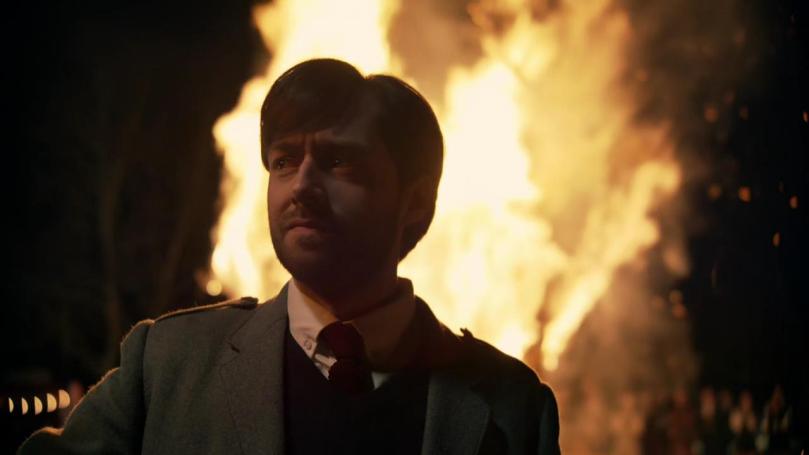 Sophie Skelton has really come into her own as Brianna in this episode.  Her performances in earlier seasons weren’t all that, to be honest, but here she played Bree’s tempestuous and bold nature far adeptly. Bree was charming, witty, and clearly in love with Roger, despite not being ready for marriage.  Her distress at the end of her argument with Roger was heartbreaking. 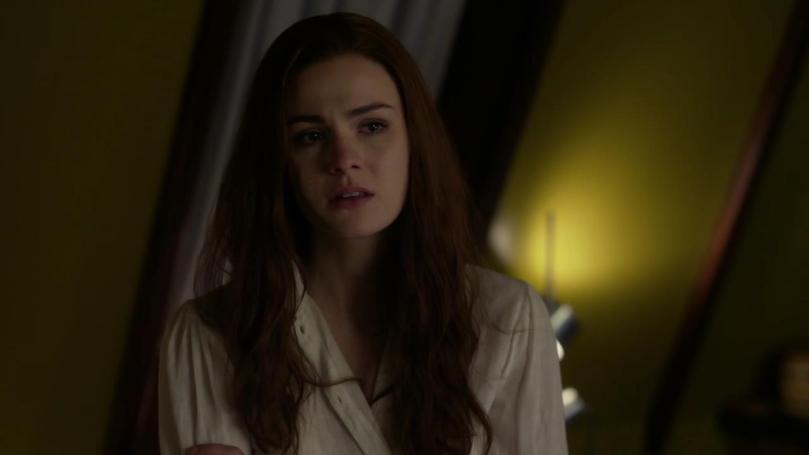 This episode showcased some of the prettiest establishing and background shots the show has ever featured.

However, there is only so much the show’s cinematographers will be able to do with the more diffuse light and grayer skies of Scotland to make it seem like far more southerly and temperate North Carolina. 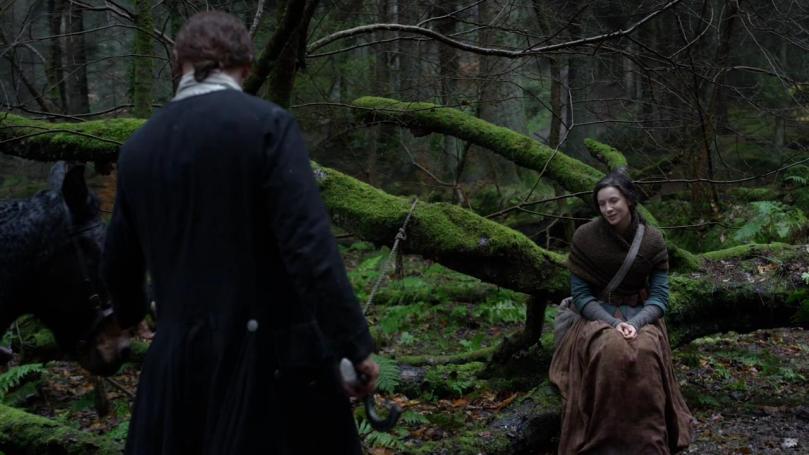 The far more northern location of the Scottish locations and colder temps dictate the actors must stay bundled up with scarves and knitted shawls and arm warmers.  It seems Caitriona Balfe puts her hands into the pockets of her skirts an awful lot.  Does she have hand warmers in there?

The episode was far better than last week’s, but there were some problems that kept from giving this a higher score:

I give this episode 4 out of a possible 5 strawberries.